explanation of the pic 2

New Economics of the Space
Technika Molodezhi No 12/2011
. 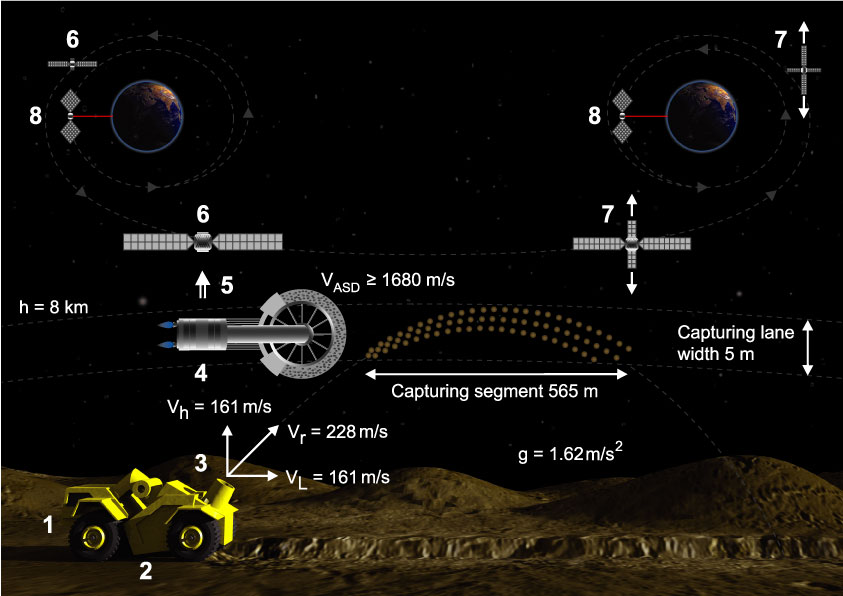 3. Soil launcher (an analogue to sand-stream apparatus). It forms a fast moving jet of ground lunar soil, it can also throw substances extracted from lunar soil and granulated: silicon, metals etc. if there is a chamber trap of gasphased type on ASD the rover can create a flow of granules of lunar ice and/or frozen oxygen, made on the Moon surface.

4. ASD with a rotative trap of the flow of the hardphase particles of the cargo, coming from the rover. ASD is equipped with a device to emit oxygen (up to 42-44% out of the mass), silicon and metals from the lunar soil. A pyrolized (thermic) method of decomposing regolith is used which demands quite high temperatures – about 2800º C. The method is effective in itself but here it is twice as effective: the needed thermic chamber is combined with EP's chamber, for instance, of an electric arc type that gives a significantly higher temperature (~20 000º C). A jet stream that compensates the braking arisen in the process of “catching” the flow of regolith from the rover is obtained by using oxygen extracted by pyrolysis from regolith as a working medium of EP. The general coefficient of efficiency of the system is thus greatly increased. Regolith decomposition can be also in place by using the known schemes of closed circles, for example, on the basis of fluorine (Y. Yeskov, “Lunmash”:  Nichego nevozmoznogo net”. TM, No 1, 2002) and/or methane.

6. IRT moved from the geostationary orbit to the circumlunar orbit to get lunar substances from ASD. As a working medium of EP oxygen is used, oxygen which was earlier isolated from the lunar soil.

7. IRT returning to the geostationary orbit with a stock of lunar substances which are in the time of moving transformed into film solar batteries. In general solar batteries are meant  to be installed on a satellite solar power station (SSPS): some part of them are used to renew and to make IRT's power plant more powerful. As a working medium of EP oxygen is in use, oxygen that is by the way isolated from the lunar soil in the process of SB production. Some part of oxygen stocks is transferred to the fuel storehouse at SSPS.

8. A gradually increased SSPS at the geostationary orbit, used also as a orbital platform for telecommunicative devices. It is also a base for circumterrestrial spacecrafts, a base that supplies their EP with a working medium on the basis of lunar oxygen.

© 2011 Alexander Mayboroda
All rights reserved. Any copy materials only with permission of the author

explanation of the pic 3

New Economics of the Space
Technika Molodezhi No 12/2011
.

Phases of the process:

1. Start of the suborbital cargo shuttle. The highest point of its trajectory is in accordance with the height of ASD's orbit at perigee (100-300 km).

2. Cargo out-throw from the shuttle in a horizontal direction at the speed 40-80 m/s in the form of a line sequence of cargo fragments – the track.

3. Made of cargo fragments track's absorption by ASD's trap.

4. Suborbital shuttle return: braking in the atmosphere and vertical landing in the zone of the launch using jet engines and/or other possible means of landing – a parachute, a helicopter rotor, wings.

5. Accumulated substance transfer into the orbital storehouse. The transfer is underway by connecting ASD right to the storehouse or with the help of additional interorbital tugboats.

6. Transfer of substances needed to make heat-shielding materials, into the production block of the orbital complex.

7. Heat-shielding covers production (capsules and screens) made out of the accumulated at the orbit raw materials and then products transfer to the chain conveyor of connecting with the objects of protection - descended to the Earth apparatuses,i.e. with spacecrafts and the last steps of the orbital rocket-carriers.

9. Separation of the reusable winged blocks of the first step, return to the launch zone and soft landing of the blocks.

10. The last step of the rocket-carrier orbiting to the production-accumulative complex's orbit, nearing it, delievered cargo transfer to the orbital station, crew replacement and reception of returning to the Earth cargoes.

11. Orbital rocket step connection and/or returning spacecraft with heat-shielding capsules and screens connection, descended apparatuses refuel in order to create a descent impulse from the orbit (braking impulse) and, in some descent versions (schemes of return), the fuel stock is given for landing the apparatuses on jet thrust.

13. Dropping the heat-shielding covers, opening the parachutes and splashdown. A vertical landing of the orbital step using the thrust of the main jet engine, to do this the step is refuelled  in space by fuel (5-10% out of the step mass) on the basis of highly boiling (not cryogenic) components.

© 2011 Alexander Mayboroda
All rights reserved. Any copy materials only with permission of the author